Culture & Tradition at a Glance 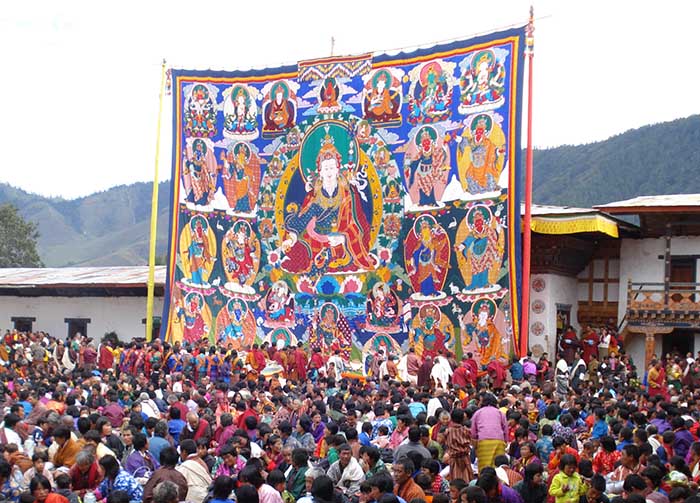 Bhutan has a rich and unique cultural heritage that has largely remained intact because of its isolation from the rest of the world until the mid-20th century. One of the main attractions for tourists is the country's culture and traditions. Bhutanese tradition is deeply steeped in its Buddhist heritage.

The national dress for Bhutanese men is the gho, a knee-length robe tied at the waist by a cloth belt known as the kera. Women wear an ankle-length dress, the kira, which is clipped at the shoulders with two identical brooches called the koma and tied at the waist with kera. An accompaniment to the kira is a long-sleeved blouse, the wonju which is worn underneath the kira. A long-sleeved jacket-like garment, the toego is worn over the kira. The sleeves of the wonju and the tego are folded together at the cuffs, inside out.
Social status and class determine the texture, colours, and decorations that embellish the garments. Differently coloured scarves, known as rachu for women (red is the most common colour) and kabney for men, are important indicators of social standing, as Bhutan has traditionally been a feudal society. Jewellery is mostly worn by women, especially during religious festivals (tsechus) and public gatherings. To strengthen Bhutan's identity as an independent country, Bhutanese law requires all Bhutanese government employees to wear the national dress at work and all citizens to wear the national dress while visiting schools and other government offices though many citizens, particularly adults, choose to wear the customary dress as formal attire.

Bhutanese architecture remains distinctively traditional, employing rammed earth and wattle and daub construction methods, stone masonry, and intricate woodwork around windows and roofs. Traditional architecture uses no nails or iron bars in construction. Characteristic of the region is a type of castle fortress known as the dzong. Since ancient times, the dzongs have served as the religious and secular administration centres for their respective districts.

Masked dances and dance dramas are common traditional features at festivals, usually accompanied by traditional music. Energetic dancers, wearing colourful wooden or composition face masks and stylized costumes, depict heroes, demons, dæmons, death heads, animals, gods, and caricatures of common people. The dancers enjoy royal patronage, and preserve ancient folk and religious customs and perpetuate the ancient lore and art of mask-making.
The music of Bhutan can generally be divided into traditional and modern varieties; traditional music comprises religious and folk genres, the latter including zhungdra and boedra. The modern rigsar is played on a mix of traditional instruments and electronic keyboards, and dates back to the early 1990s; it shows the influence of Indian popular music, a hybrid form of traditional and Western popular influences.

Rice (red rice), buckwheat, and increasingly maize, are the staples of Bhutanese cuisine. The local diet also includes pork, beef, yak meat, chicken, and lamb. Soups and stews of meat and dried vegetables spiced with chilies and cheese are prepared. Ema datshi, made very spicy with cheese and chilies, might be called the national dish for its ubiquity and the pride that Bhutanese have for it. Dairy foods, particularly butter and cheese from yaks and cows, are also popular, and indeed almost all milk is turned into butter and cheese. Popular beverages include butter tea, black tea, locally brewed ara (rice wine), and beer. Bhutan is the first country in the world to have banned the sale of tobacco under its Tobacco Act of 2010