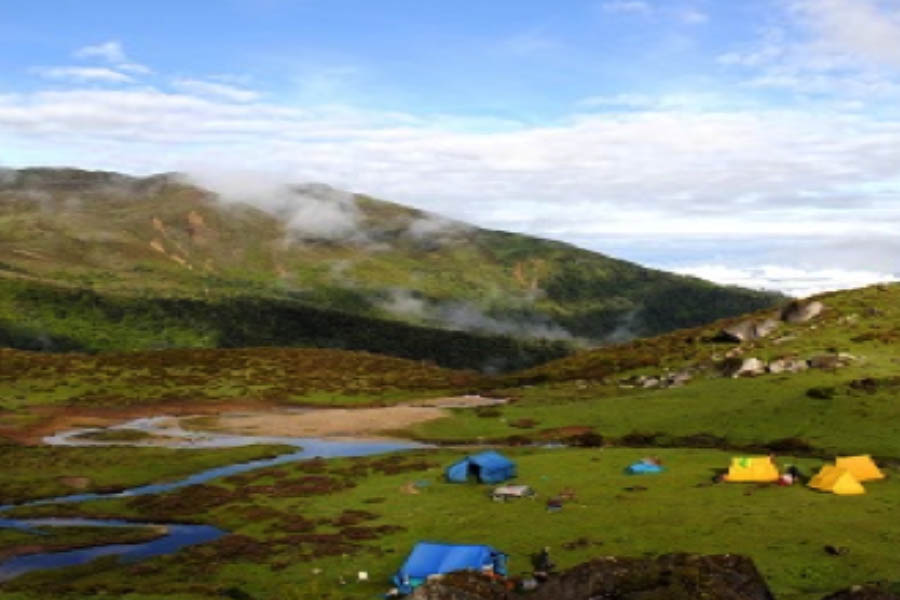 This Trek is to a natural hot spring in Gasa. The Hot springs are believed to have curing effects to so many ailments like allergy, skin diseases and rheumatism. This Trek starts from Damji and ends in Damji near Punakha. The Trek is for 3 days. The Best time to do this Trek is from March â€“ May and September â€“ November.

Arrive at Paro (2280 meters) â€“ Thimphu: You will be received by the Representative from Omkara Tours & Travels at the airport and drive to Thimphu. In the evening, visit Tashichho Dzong (Fortress of the Glorious Religion), built in 1641 by Shabdrung Ngawang Namgyal and reconstructed in 1961 by the Late King, His Majesty King Jigme Dorji Wang chuck, who is regarded as Father of Modern Bhutan. Then visit Handicrafts Emporium to see the exquisite artistry of traditional crafts and textiles. Over night in Hotel.

Thimphu â€“ Punakha: (83 Kms, 3 hours drive). After breakfast, drive to Punakha via Dochula pass. If the weather is clear, we stop for a while at Dochula pass to view Higher Himalayas. Enroute stop a while to view Chimi Lhakhang also called the â€œTemple of Fertilityâ€ built by Lama Drukpa Kuenley who is popularly known as â€œThe Devine Mad Manâ€ in 15th century. After lunch, visit Punakha Dzong built in 1637 by Shabdrung Ngawang Namgyal and is situated between Pho Chu (Male River) and Mo Chu (Female River). For many years until the time of the second king, it served as the seat of the Government. The construction of the Dzong was foretold by Guru Rimpoche, who predicted that, â€œâ€¦a person named Namgyal will arrive at a hill that looks like an elephantâ€. There was a smaller building here called Dzong Chu (Small Dzong) that housed a statue of Buddha. It is said that Shabdrung ordered the architect, Zowe Palep, to sleep in front of the statue, while Palep was sleeping; the Shabdrung took him in his dreams to Zangtopelri (Paradise) and showed him the palace of Guru Rimpoche. From his vision, the architect conceived the design for the new Dzong, which in keeping with the tradition, was never committed to paper. The Dzong was named Druk Pungthang Dechen Phodrang (Palace of Great Happiness). The war materials captured during the battle with Tibetans are preserved here. Punakha is still the winter residence of Je-Khenpo and King Jigme Dorji Wangchuk convened the First National Assembly here in 1952. In the evening, drive to Thimphu. Dinner and overnight in Hotel.

Punakha â€“ Gasa (2638 meters): After breakfast, drive to Gasa. Lunch at Gasa. We camp near the Hotspring. After lunch, spend the time in Hotspring. Dinner and overnight in Camp.

Gasa: After breakfast, visit Gasa Dzong and village around Gasa. After lunch, spend the time in Gasa Hotspring. Dinner and overnight in camp.

Punakha â€“ Thimphu: After breakfast, drive to Wangdiphodrang and visit the Dzong (from outside) built in 1638. Legend relates that as the people were searching for the site of the Dzong; four ravens were seen flying away in four directions. This was considered auspicious sign, representing the spread of Buddhist religion to the four points of the compass. The Dzong is situated at the confluence of Mo Chu and Tang Chu rivers. Then drive to Thimphu. In the evening, free for shopping and photography in the town. Dinner and overnight in Hotel.

Thimphu (2320 meters) sightseeing â€“ Paro: After breakfast, visit the National Memorial Chorten, a monument dedicated to the Third King of Bhutan. His Late Majesty King, Jigme Dorji Wangchuck. The inside paintings and statues provide a very rare insight into Buddhist Philosophy. Then visit the National Library, which holds a vast collection of ancient Buddhist manuscripts followed by visit to Painting School, famous for carving and free hand art and Folk Heritage Museum. Then visit Sangaygang view point and the Takin Preserve center and to the largest statue of Buddha (In the world) and drive to Paro. After lunch, visit the Ta dzong, an ancient watchtower, which has been, since 1967, the National Museum of Bhutan then visit Rimpung Dzong (Paro Dzong) built in 1646 by Shabdrung Ngawang Namgyal. The Dzong presently houses administrative offices. Dinner and over night in Hotel.

Paro Sightseeing: (Altitude 2320 m) After breakfast, drive to Paro. Excursion to Taktsang Monastery: A short drive takes us to Satsam Chorten, the trail climbs through beautiful pine forest, many of the trees festooned with Spanish moss, and an occasional grove of fluttering prayer flags. We stop for a rest and light refreshments at the Taktsang Jakhang (cafeteria) and then walk a short distance until we see, clearly and seemingly within reach, Taktsang monastery. The primary Lhakhang was built around Guru Rimpocheâ€™s meditation cave in 1684 by the Penlop of Paro, Gyaltse Tenzin Rabgay; this incredible monastery clings to the edge of a sheer rock cliff that plunges 900 meters into the valley below. Legend has it that Guru Padmasambhava, the Tantric mystic who brought Buddhism to Bhutan in 747 AD, flew here on the back of a flying tiger, Dorji Drolo, said to be his favourite consort. In the evening, visit the Drukgyel dzong, now in ruins was built by Shabdrung Ngawang Namgyal to commemorate the victory over the Tibetan invaders in1644; the dzong nameâ€™s means indeed â€œ victorious Druk â€œ. The Dzong was used as an administrative center until 1951 when a fire caused by butter lamp destroyed it. Then visit Kyichu Lhakhang, one of Bhutanâ€™s oldest and most sacred monasteries dating from the introduction of Buddhism in the 8th century and Dinner and overnight at the hotel in Paro.

Departure: After breakfast, drive to the airport and farewell