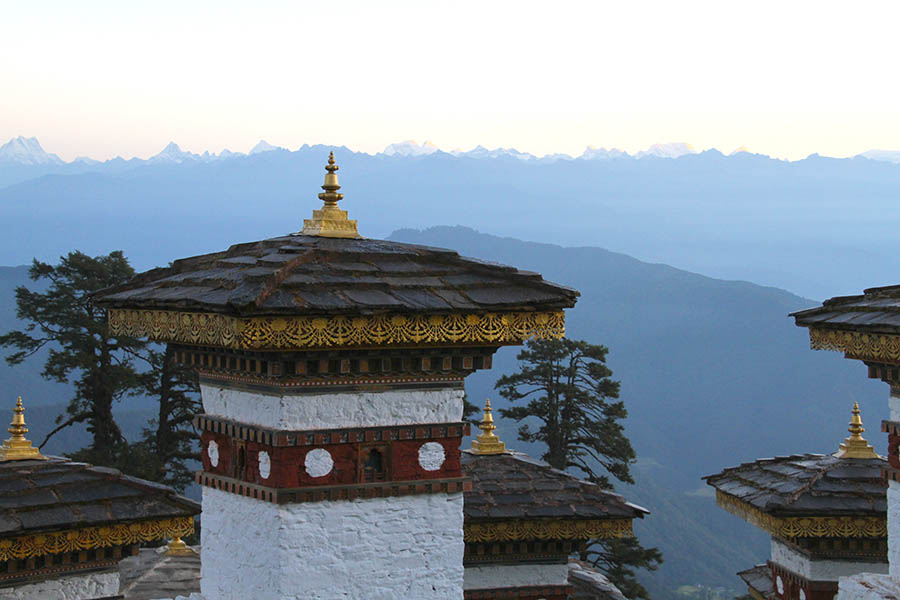 Bhutan Insight Tour is a wonderful package tour that gives you a great insight to the wonderful country of Bhutan. You get to witness what makes Bhutan just wonderful. The beautiful valleys of the himalayas with river flowing through it, the different people and their culture and festivals and many more.

Arrive Paro (Altitude 2280 m) (By Druk Air flight): Your Guide from Omkara Tours & Travels will receive you at the airport and drive you the short distance to the Hotel.
After lunch, drive to the ruins of the Drukgyal Dzong 16 km up the valley built in 1647 by the great Shabdrung Ngawang Namgyal, father and unifier of medieval Bhutan, the Dzong was destroyed by accidental fire and left in ruins as an evocative reminder of the great victories it was built to commemorate. Explore the ramparts and on a clear day experience an unforgettable view of Mt. Jhomolhari (7,314 m). On the way back, visit Kichu Lhakhang, built in 659 A.D by the Tibetan king Srongsen Gampo. Dinner and overnight at Hotel in Paro.

Paro â€“ Thimphu, Excursion to Taktsang Monastery: (Altitude 2320 m, 54 kms) A very special day, with an excursion to view the spectacular Taktsang (Tigerâ€™s Nest) monastery â€“ After breakfast a short drive takes us to Satsam Chorten, from there a 2 hours walk till the viewpoint of the monastery. The trail climbs through beautiful pine forest, many of the trees festooned with Spanish moss, and an occasional grove of fluttering prayer flags. We stop for a rest and light refreshments at the Taktsang Jakhang (cafeteria) and then walk a short distance until we see, clearly and seemingly within reach, Taktsang monastery. The primary Lhakhang was built around Guru Rimpocheâ€™s meditation cave in the 1684by the Penlop of Paro Gyaltse Tenzin Rabgay, this incredible monastery clings to the edge of a sheer rock cliff that plunges 900 meters into the valley below. Legend has it that Guru Padmasambhava, the tantric mystic who brought Buddhism to Bhutan, flew here on the back of a flying tiger, Dorji Drolo, said to be his favourite consort.
After Lunch, visit Ta Dzong (built in1656 and renovated in 1968), an ancient watchtower, which now houses the National Museum. Below the museum is the Paro Rimpung Dzong (literally meaning â€œHeap of Jewelsâ€, built in 1646 by Shabdrung Ngawang Namgyal, the centre of civil and religious authority in this valley. A short walk takes you to the base of the Dzong and across a traditional cantilevered, covered bridge. On the way, visit Tamchog Monastery built by Thangthong Gyalpo (Popularly known as Lama Chazampa, which literally means, the Iron Bridge builder) in the 15th century.

Thang Thong Gyalpo (1385 â€“ 1464) was a wonder working saint from Tibet who came to Bhutan in 1433 looking for Iron Ore. He built 108 bridges across Tibet and Bhutan, out of which 8 were built in Bhutan. His only surviving bridge is in Duksum (Tashi Yangtse in Eastern Bhutan).
Drive to Thimphu. Dinner and overnight at Hotel in Thimphu.

Thimphu â€“ Punakha: (Altitude 1310 m) (72 Kms, 3 hours drive). After breakfast, drive to Punakha via Dochula pass. If the weather is clear, we stop for a while at Dochula pass to view Higher Himalayas. On the way, visit Chime Lhakhang, which was built by Lama Drukpa Kuenley. He subdued the demons with his â€œMagical Thunder boltâ€. The Temple is also known as â€œthe Temple of Fertilityâ€.
Lama Drukpa Kuenley (1455 â€“ 1529) was one of the Bhutanâ€™s Favourite Saints who was born in Tibet, trained at Ralung Monastery and was a contemporary and a disciple of Pema Lingpa. He Travelled throughout Bhutan and Tibet as a â€œNeljorpaâ€ (Yogi) using songs, humour and outrageous behavior to dramatise his teachings of Salvation through sex.
After lunch, visit Punakha Dzong built in 1637 by Shabdrung Ngawang Namgyal and is situated between Pho Chu (Male river) and Mo Chu (Female river). For many years until the time of the second king, it served as the seat of the Government. The construction of the Dzong was foretold by Guru Rimpoche, who predicted, â€œâ€¦a person named Namgyal will arrive at a hill that looks like an elephantâ€. There was a smaller building here called Dzong Chu (Small Dzong) that housed a statue of Buddha. It is said that Shabdrung ordered the architect, Zowe Palep, to sleep in front of the statue, while Palep was sleeping, the Shabdrung took him in his dreams to Zangtopelri and showed him the palace of Guru Rimpoche. From his vision, the architect conceived the design for the new Dzong, which in keeping with the tradition, was never committed to paper. The Dzong was named Druk Pungthang Dechen Phodrang (Palace of Great Happiness). The war materials captured during the battle with Tibetans are preserved here. Punakha is still the winter residence of Je-Khenpo and King Jigme Dorji Wangchuk convened the new national Assembly here in 1952. Dinner and overnight at Hotel in Punakha.

Punakha â€“ Gangtey â€“ Trongsa: (Altitude 2800 m, 157 kms): We start early today. After breakfast, drive to Trongsa via. Gangtey. Enroute sightseeing in the valley of Wangdiphodrang, it includes: visit to Wangdiphodrang Dzong (from outside) built in 1638. Legend relates that as the people were searching for the site of the Dzong, four ravens were seen flying away in four directions. This was considered auspicious sign, representing the spread of Buddhist religion to the four points of the compass. The Dzong is situated at the confluence of Mo Chu and Tang Chu rivers. Drive further to Gangtey. Visit Gangtey Gompa. Gyaltse Pema Thinley, the grandson and mind reincarnation of Pema Lingpa founded the Temple in 1613, and Tenzin Legpai Dhendup, the second re-incarnation, built the temple. The present Abbot, Kunzang Pema Namgyal is the ninth re-incarnation. It is a Nyingmapa monastery and is affiliated to other Nyingmapa monasteries including Tamshing in Bumthang.
Explore Phobjikha valley, famous for the Black Necked Cranes during winter. Packed lunch will be served at Gangtey. After Lunch, drive to Trongsa. Visit Trongsa Dzong, the most impressive Dzong in Bhutan, built in its present form in 1644 by Chogyal Minjur Tempa, the official who was sent by Shabdrung to unify eastern Bhutan and enlarged at the end of the 17th century by Desi Tenzin Rabgay. Trongsa Dzong is the ancestral home of the present Royal Family and first two hereditary kings ruled Bhutan from this Dzong. Then Visit Ta Dzong, an ancient watch tower. The chapel inside the Ta Dzong is dedicated to the Trongsa Penlop Jigme Namgyal.
Dinner and overnight at Hotel in Trongsa.

Trongsa â€“ Bumthang: (Altitude 2800 m, 68 kms): After breakfast, drive to Bumthang. Lunch at Bumthang. After lunch, visit Jakar Dzong, which literally means â€œThe Castle of White Birdâ€. The current structure was built in 1667. Visit Jambay Lhakhang said to have been built by King Srongsen Gampo of Tibet in the year 659 on the same day as Kichu Lhakhang in Paro. The temple was visited by Guru Rimpoche during his visit to Bumthang and was renovated by Sindhu Raja after Guru Rimpoche restored his life force. Under the temple is said to be a lake in which Guru Rimpoche hid several Terma. In October one of the most spectacular festival, â€œJambay Lhakhang Drupâ€ is staged here. Dinner and overnight in Swiss Guest House or similar.

Bumthang Sightseeing (Altitude 2800 m): After breakfast, visit Kurjey Lhakhang that is named after body print of Guru Rimpoche, built in 1652 by Minjur Tempa. Then visit Tamshing Lhakhang (Temple of the good message), established in 1501 by Pema Lingpa and is the most important Nyingmapa temple in the kingdom. After lunch, visit Membartsho (Literally means â€œThe Burning Lakeâ€), a short distance up the road leading to Tang valley. The Terton Pema Lingpa discovered several of Guru Rimpocheâ€™s hidden Terma / relics here and visit Mathra factory & Cheese Factory. In the evening, visit to a Bhutanese Farm House. Dinner and overnight at Hotel in Bumthang.