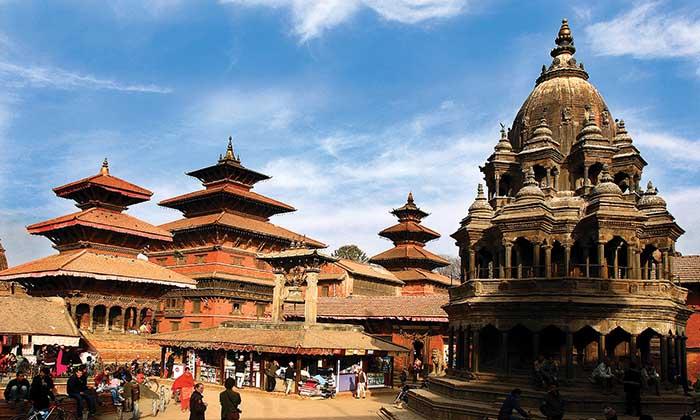 Arrival in Kathmandu. Meet and assist by our representative and transfer to the Hotel. Overnight at Hotel (B)

Visit Kathmandu City, Swayambhunath and Patan City. Overnight at Hotel (B)
Kathmandu Durbar Square: Situated in the heart of old Kathmandu city at Basantapur, Kathmandu Durbar Square never fails to impress first time visitors with its ensemble of palaces, courtyards and temples built during the Malla period. The Durbar Square includes the Hanuman Dhoka Royal Palace, the historic seat of the royalty; the magnificent Taleju Temple towering more than 40 meters; Kumari Ghar, the residence of the Living Goddess, Kumari; Ashok Vinayak, also called Kathmandu Ganesh, a temple without a filial; and Kal Bhairav, the God of Wrath. The capital takes its name from the giant pagoda of Kasthamandap, which is said to have been built out of a single tree. Since the time of the Malla kings, the Durbar Square has been the cityâ€™s social, religious and political focal point. The entire area is one of the busiest market places with shops selling the vegetable, local spices, clothes etc.

Swayambhunath: Considered as Resting on a hillock 3 km west of Kathmandu, it is one of the holiest Buddhist Chaityas in Nepal. It is said to have evolved spontaneously when the valley was created out of a primordial lake more than 2,000 years ago. This stupa is the oldest of its kind in Nepal and has numerous shrines and monasteries on its premises. Located at the of 77 m from the ground level it has magnificent birdâ€™s eye view of crowded Kathmandu Valley.

Visit Pashupatinath, Boudhanath and Bhaktapur City. Overnight at Hotel (B)
Pashupatinath: One of the most sacred temple of Hindu, Pashupatinath is situated 5 km east of Kathmandu. The two-tiered pagoda with golden roofs and silver doors houses the sacred linga, or phallic symbol, of Lord Shiva. Chronicles indicate the temple existed before 400 A.D. Pashupathinath is also the most sacred place where the Hindus cremate the deceased.

Bouddhanath: This colossal and ancient Buddhist Stupa, one of the biggest in the World, has the all seeing eyes of Lord Buddha. Situated 8 km to the east of downtown Kathmandu, Bouddhanath is one of the most imposing landmarks in Kathmandu, visible as soon as you land at the Tribhuvan International Airport.

Departure transfer to the airport for onward journey (B).