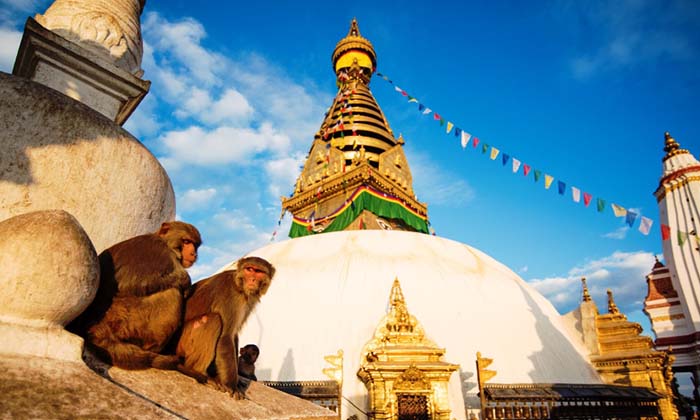 Arrival in Kathmandu. Meet and assist by our representative and transfer to the Hotel. Overnight at Hotel

Visit Bhaktapur City and drive to Nagarkot. Overnight at Hotel (B)

Enjoy the sunrise and the drive to Chitwan. Overnight at Resort (B,L,D)

Chitwan: Located approximately 166 Km from Kathmandu, the Chitwan National Park is Asiaâ€™s best preserved conservation area, where wildlife thrives and their habitats remain intact. The park lies in the Inner Terai lowlands and consists of Sal forests, tall elephant grasslands, hills, ox-box lakes and flood plains of the Narayani, Rapti and Reu rivers. Enlisted as a UNESCO World Heritage Site (Natural) in 1984, the park spreads over an area of 932 sq. km and is home to 56 species of mammals, 49 species of amphibians and reptiles, and 525 species of birds. Wildlife found here include endangered species like the one-horned rhinoceros and the Royal Bengal tiger, gaur, wild elephant, four-horned antelope, leopard, sloth bear, wild boar, rhesus monkey, grey langur monkey, wild dog, small wild cats, and many other smaller animals. Also found here are cobras, kraits and pythons.The swampy areas and numerous oxbow lakes of Chitwan provide a home for the marsh mugger crocodiles. In a stretch of the Narayani River are found one of the few remaining populations of the rare and endangered fish-only eating gharial, or Gangetic crocodile. Also found here is one of the worldâ€™s four species of freshwater dolphins.

Drive from Chitwan to Pokhara. Overnight at Hotel (B)

Pokhara Valley: The Pokhara Valley, the gateway to the Annapurna region is one of the most picturesque spots of Nepal. Pokhara with its natural beauty, pristine air, spectacular backdrop of snowy peaks, serene lakes and surrounding greenery make it â€˜the jewel in the Himalayaâ€™, a place of remarkable natural beauty. With the magnificent Annapurna range forming the backdrop and the serenity of three major lakes â€“ Phewa, Rupa and Begnas â€“ Pokhara is the ultimate destination for relaxation. Pokhara Valley, gateway to the Annapurna region where many a trekker finds his Shangri-la, sits high on the list of â€˜must visitâ€™ places in Nepal. Pokhara is definitely a place not to be missed.

Free day in Pokhara. Overnight at Hotel (B)

Pokhara has something for everyone. The entire day is free. As per your interest enjoy the sightseeing tour of Pokhara valley or boat ride in Phewa Lake or hike to World Peace Pagoda or Sarangkot or enjoy the adventure activities like paragliding or ultralight aircraft.

Drive from Pokhara to Kathmandu. Visit Patan City. Overnight at Hotel (B)

Departure transfer to the airport for onward journey. (B)