Religion at a Glance 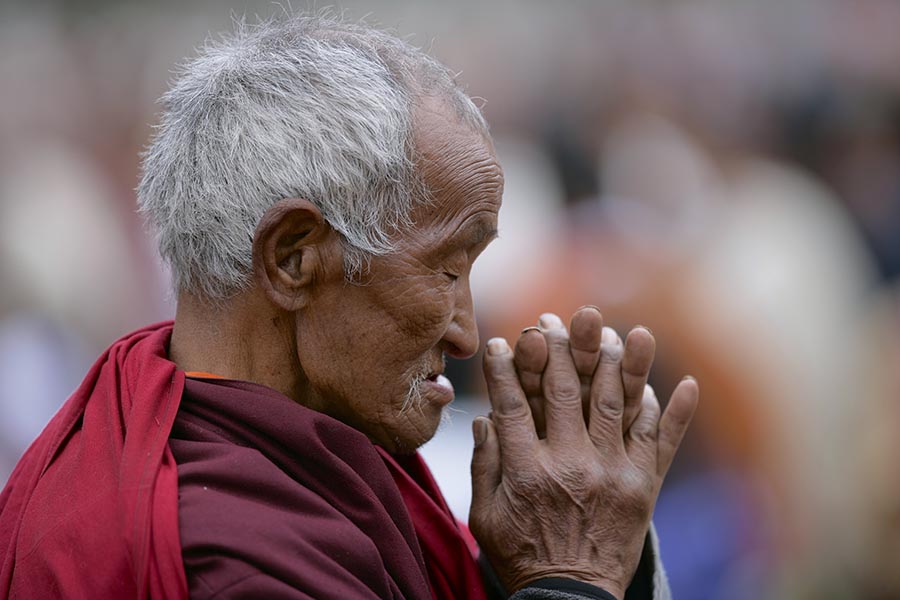 Mahayana Buddhism is prominent form of Buddhism that is followed and practised in Bhutan. Buddhism was introduced to Bhutan in the 7th century AD. by Tibetan king Songtsän Gampo (reigned 627–649), a convert to Buddhism, ordered the construction of two Buddhist temples, at Bumthang in central Bhutan and at Kyichu Lhakhang (near Paro) in the Paro Valley. Many great Gurus and Rinpoche (precious one) have contributed in making Buddhism a core part of a Bhutanese to the present day. Here are some of the great stake holders on Buddhism in Bhutan

Guru Padmasambhava or the "Lotus-Born", also known as Guru Rinpoche, was an 8th-century Indian Buddhist master. A number of legends have grown around Padmasambhava's life and deeds, and he is widely venerated as a 'second Buddha' across Tibet, Nepal, Bhutan, and the Himalayan states of India.
In Tibetan Buddhism, he is a character of a genre of literature called terma, an emanation of Amitābha that is said to appear to tertöns in visionary encounters and a focus of guru yoga practice, particularly in the Rimé schools. The Nyingma school considers Padmasambhava to be a founder of their tradition.
Bhutan has many important pilgrimage places associated with Padmasambhava. The most famous is Paro Taktsang or "Tiger's Nest" monastery which is built on a sheer cliff wall about 500m above the floor of Paro valley. It was built around the Taktsang Senge Samdup (stag tshang seng ge bsam grub) cave where he is said to have meditated in the 8th Century. He flew there from Tibet on the back of Yeshe Tsogyal, whom he transformed into a flying tigress for the purpose of the trip.[citation needed] Later he travelled to Bumthang district to subdue a powerful deity offended by a local king. According to legend, Padmasambhava's body imprint can be found in the wall of a cave at nearby Kurje Lhakhang temple.

Ngawang Namgyal (1594–1651), the founder of the Bhutanese state. He entered Bhutan in 1616 and constructed the Semtokha Dzong and unified Bhutan. He formed the political and religions centers and introduced various arts and crafts, culture and traditions. He is also referred as the "Founder of Bhutan". He was a master architect and made Dzongs that housed the political and religious offices all over Bhutan which served as the fortress against attacks from Tibetians and other territorial kingdoms of India.

Drukpa Kunley (1455–1529), also known as the "Divine Madman", was a monk (Mahamudra) in the Tibetan Buddhist tradition, as well as a famous poet, and is often counted among the Nyönpa. After undergoing training in Ralung Monastery under siddha Pema Lingpa, he introduced Buddhism to Bhutan and established the monastery of Chimi Lhakhang there in 1499. He is famous for his un-orthodox method of teachings.

People of Bhutan play an important role in following, practising and keeping the light of Buddhism alive in Bhutan. Daily life of a Bhutanese revolves around Buddhism making a Bhutanese more humane when it comes to compassion and regard for all sentient beings living together in this world. Important religious days like the 10th Day dedicated to Guru Rinpoche are celebrated by all and with dedication and respect. The temples and monasteries are always filled with people from all walks and life and of all age group throughout the day where they pray, prostrate and turn the prayer wheels.